Every LEGO topic that does not fit in the other categories
Forum rules
The Brickstow community is founded to talk about LEGO. inappropriate language is not a part in that. Stay always on topic to keep things cozy! The Brickstow team will act if you behave inappropriate.
Post Reply
12 posts

Like quite a few others: I won't call this Dinosaur Fossils because the name is incorrect with the inclusion of Pteranodon.

This topic is triggered because Jackbrick stated he isn't a fan of this set and I'm wondering why. I've read quite some feedback online after this set was anounced. So here is my take:

Wrong colour, the entry was tan!
Tan is also a wrong colour, the Tyrranosaurus Rex that I've seen was more brownish maybe dark tan. Designers aren't allowed many recolors for a set so I understand the pragmatic aproach.

Wrong dinosaurs! Yet another T-Rex!
Yes the entry suggested several different animals, but from a commercial point of view, LEGO needs to sell as many sets as possible and these are some of the most well known and most popular ones. I don't blame them for the choice. And I love T-Rex so I'm biased

Yes, there 's a lot that can be set about animals not being anatomically correct but for the size(which is impressive enough for me) and limits of the LEGO systems I think the designers have done an admirable job. For me personally I don't feel the need for minifig and skeleton and haven't got them on display with the set.

Concluded, with 899 parts you get 3 great display models. And the price of €65 is very decent in my opinion.

So if you like Dinosaurs this is a recommendable display set in my opinion. Although I have added some height to the base of the T-Rex for better display.

===
I will try to start a new set discussion every week(end), next week it will be 80105 Chinese New Year Temple Fair and will probably include 80104 Lion Dance as well. After that I might get out some of my childhood sets

1. I don't have a thing with dinosaurs. I did enjoy the first Jurassic Park movie in my younger days, but next to that it just does not really interest me. Matter of personal taste, don't blame me for it!

2. Offcourse, it is a nice set. If you are a display type of guy, you definately want this! But.. I am not that kind of guy either. I do have a bit of a display thing in my living room, in my massive book wallcloset. But the items in there are totally different from Lego and displaying Lego with that just does not fit in any way. (Anchient laptop, smuggled pieces of rock from other countries, an old beer bottle et cetera)

3. We as the Brickstow team are the building-a-city kind of "fols"!

So.. sets should be applicable to city sceneries or mocs, or the parts should be mostly applicable for building city buildings. I feel this one isn't that much suitable for that purpose.

4. I am in for some open mindedness. If I ever start a museum project for the city.. these should fit more than fine! But the backlog is massive already with other ideas and projects going on, so no. 1, 2 and 3 make me move my money away from 4!

Awesome topic! I am really curious to other opinions! Who else shares their take on this one?
Founding father of this website.

First of all, I hope this came across as light hearted as it was intended and you took it with a truckload of salt

1. Fair enough, if someone gave me a box of grey bricks called Star Wars whatever kind of vehicle I wouldn't care as well. Or the Ideas Apollo same thing. And you don't want to get me started on everything wrong with Jurassic Park

2. Same goes for me, I have 5 shelves in my bookcase for display in my living room, but dinosaurs are one of my things so the models got one of these shelves.

3. I have the same that's what makes tne Pirates Ideas set so hard to give a place and why I stopped collecting Architecture.

4. If you want to build a museum with these you'll need tons of bricks and a lot of space. Although probably accurate scale, they are massive. So I would advise to moc the dinosaur from the Ideas research institute 21110 set for that purpose.

Thanks for the compliment and would also love to hear some different opinions!
Sarcasm is my oxygen

Whaha nice, you even numbered your replies.

So dinosaurs, but not Jurassic Park? How does that work?


Also, very curious to other opinions!
Founding father of this website.

Don't get me wrong, it's entertainment, but it's full of mistakes. There's a Youtube channel called your dinosaurs are wrong, that's the kind of rants I could have about the movie monsters. The first scene of the movie is a Velociraptor being excavated in the states (it's impossible, they lived in current Mongolia) etc etc. Also, the Mosasaur (way too big) lagoon in the last movie has a single door entrance. The shelter where I work has double doors and those are just cats... You get my point by now I guess

But... everything before the year 1900 on earth only happened in Hollywoodland, didn't you know?

Even though my cats always had a single door, I think I totally get your point! My interest in dinosaurs (or maybe the lack of said interest) has not grown, but I do respect the fact that I just learned something about them - and the false presentation of the Hollywoods.

But... everything before the year 1900 on earth only happened in Hollywoodland, didn't you know?

That explains a lot! So the salad also wasn't invented by Caesar?

And like I said, fair enough if something just isn't something you're interested in, my point was this set is actually good for those that are interested in dinos. Even better if the set would get kids interested in the subject and get curious to learn more themselves of course

(And a shelter would have a bigger problem if an animal went outside compared to the normal home situation, a bit like a zoo, that's why I compared the 2

)
Sarcasm is my oxygen

So, after being convinced by @Bricksterdam that this set is totally worth a buy, I bought it

Time passed... Saw and considered it more than once, chose other sets to buy.

When finally... I decided to stuff my May hobby budget into it.

What helped mentally, is that the city is not yet back up, and this set would seem to be very suitable to build and display in my book closet for a while, untill I get around to creating a museum for it.

So there I went and here we go, pictures of the three builds and the minifigs: 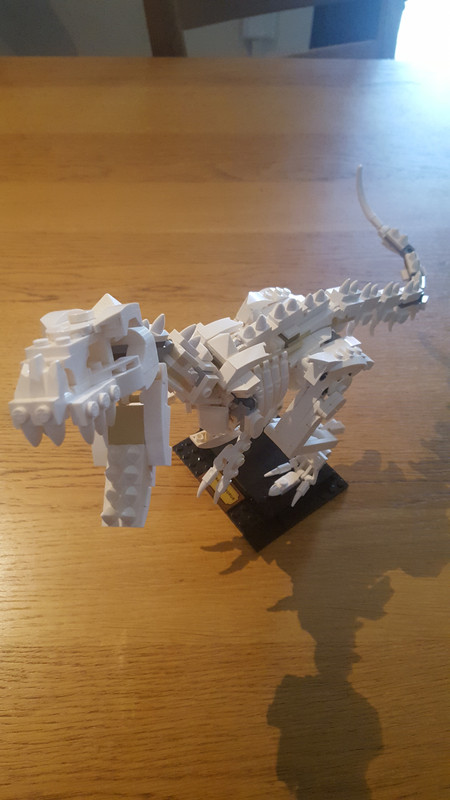 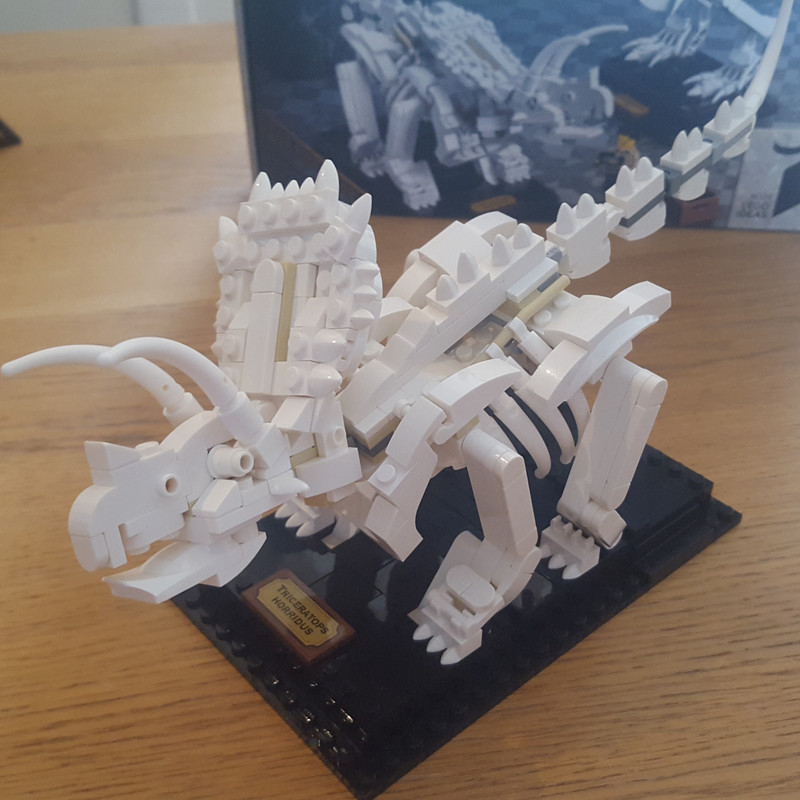 (second build, the tank design of a prehistoric rhino) 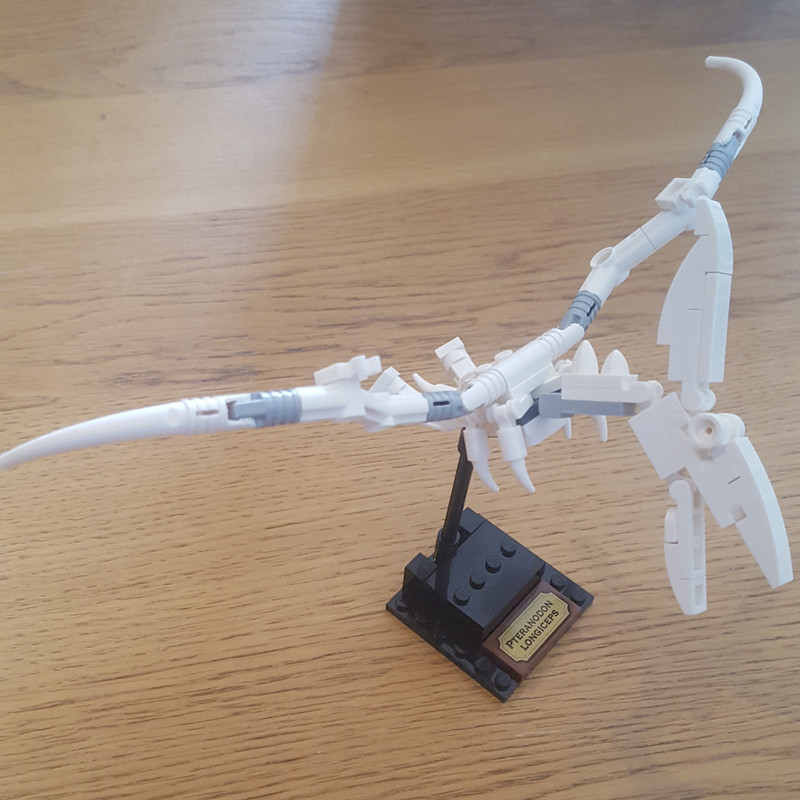 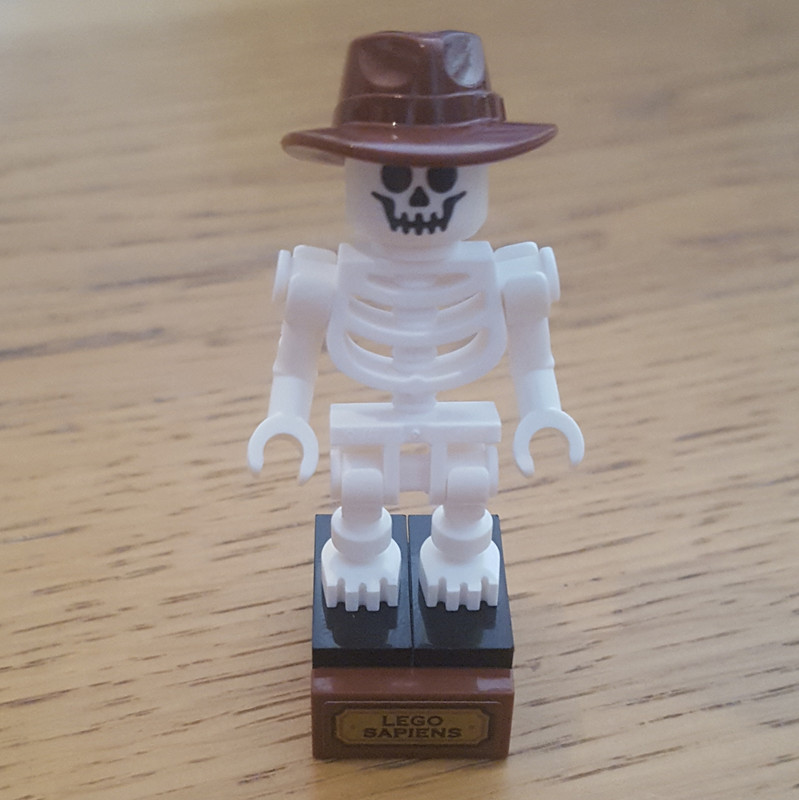 And offcourse, skeletons are not prehistoric recognized stuff untill you have another type of nerd specialized in prehistorisism, authenticating those bones right? So within the set there is also a little guy with a magnifying glass, examining bones: 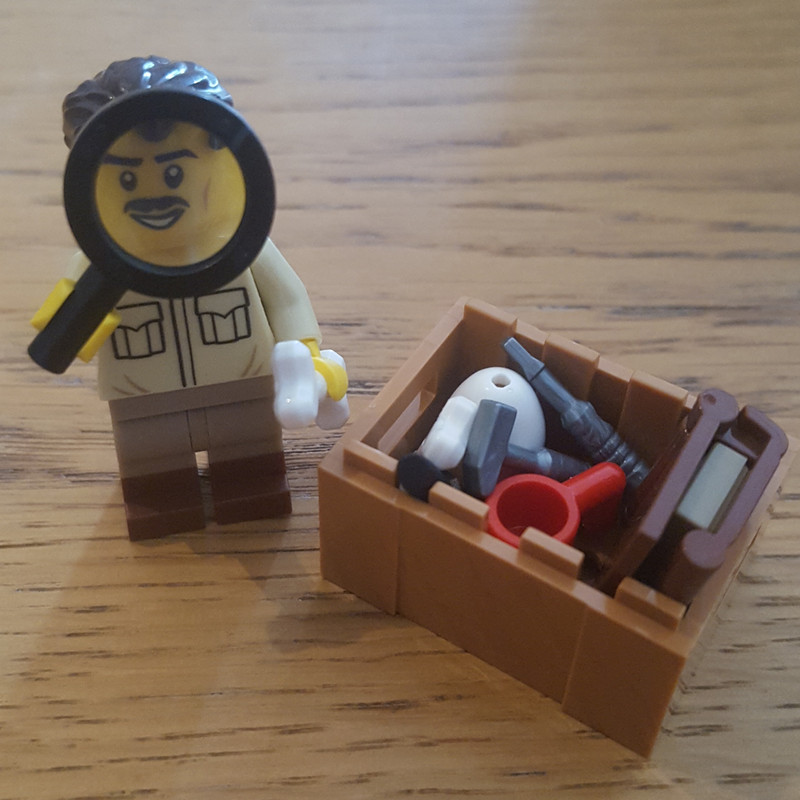 So the IDEA designer is Jonathan Brunn, look him up - you can read the 10K Club interview on LEGO IDEAS here. This French cat has done a remarkable job together with LEGO to create - in my opinion - not only a challenging and fun build, but also a massive close-to-real design which actually ends up in something you'd see as an actual bones thing from a distance - if you don't look closely, surely a non-FOL whould not recognize it instantly as made of LEGO. I can attest to this, since I have monkeytested it on my girlfriend.

Anyone else have build this one? And if you have, what was your experience? And if you would choose to advise me, shelve it anyway or go for a museum build?
Founding father of this website.

It's not a big chicken but the 'Giant Lizard King'

But fair enough, you know to which group of dinosaurs it belongs

Glad you had fun with this set. You need a massive museum for these like I said before and would be a shame to hide these inside a building imho, but at the same time, the museum would be awesome

so you can rebuild or buy multiples to really fill a shelf :p
Sarcasm is my oxygen

Ow those rebrickables are nice! I agree that it would be a shame to make them dissapear in a building... that is why I have a mod/moc idea, which involves the Ship-in-a-bottle...