"Official" means announced by LEGO on their website or found in their stores. That is what we gather here!
Forum rules
Everyone can start a topic, both Dutch and English topics are welcome / Iedereen kan een topic starten, Nederlands- en Engelstalige topics zijn welkom!
Post Reply
12 posts

..and kill a set launch in the process. How the Technic Bell-Boeing V-22 Osprey launch due in august got killed by LEGO. Pressured by pacifists. 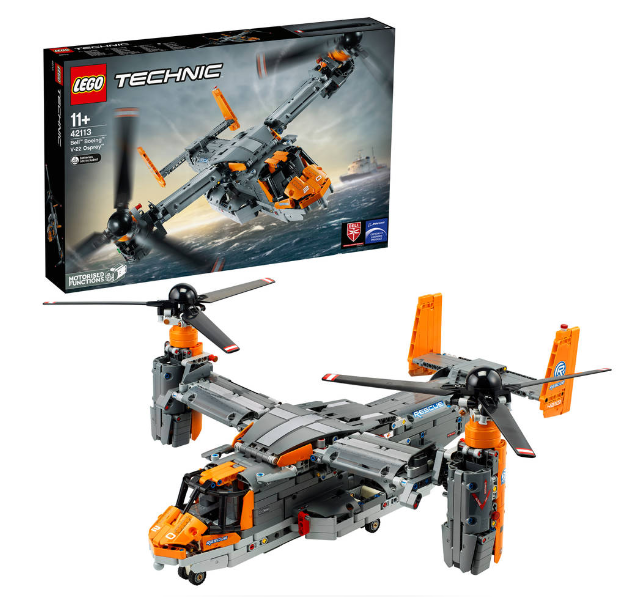 For those who missed it: some Germans from the dfg-vk group started pushing back an announced LEGO Technic set because of... well.. the The LEGO Group's own outspoken point of view to not create sets based on any militairy stuff. Ever.
First about the German group: a bit of an odd band of brothers and sisters I think, scrolling through their website. Allthough I support their main purpose to be outspoken against any type of warfare, they seem a bit agressive in their ways.. as some pacifist groups sometimes seem - and also their webshop is somewhat of a random stuff diddly, from banners/flags for your local pacifist protest to.. an plain plastic A4 size folder stand?! Some creativity in their funding I guess. Dunno.

Back on topic: LEGO started a cooperation with Bell-Boeing to produce an V-22 Osprey set, which would resemble this militairy vehicle on the right.
What seem to have happened, is that somewhere in the process the involved LEGO employees where like "ow wait, this is in fact a militairy vehicle, but if we create it for a technic set as a SAR vehicle (Search-and-rescue) with the suitable paintjob, it is not militairy! AWESOME!" So they did. But the German pacifists got a hold on the project ideas and started to act against it on the internet, stating "love bricks - hate war" trying to prevent the SAR-Osprey from being launched.

They have succeeded, because today's news says LEGO states the following: "The LEGO Technic Bell Boeing V-22 Osprey was designed to highlight the important role the aircraft plays in search and rescue efforts.

"While the set clearly depicts how a rescue version of the plane might look, the aircraft is only used by the military. We have a long-standing policy not to create sets which feature real military vehicles, so it has been decided not to proceed with the launch of this product.

"We appreciate that some fans who were looking forward to this set may be disappointed, but we believe it’s important to ensure that we uphold our brand values."

A really kind way to cave for pressure from the masses, but maybe the right question in this case is: is the viewpoint of the pacifist group from Germany really the viewpoint from the masses? Or just a biased minority? I personally also can reason against the viewpoint of not launching by stating LEGO should actually launch this set, creating a play experience for their fans which is really morally defendable: let's try to save people when they are in trouble, that is what a SAR-vehicle tells us. Should we also ban the LEGO hospitals? They will be used in case of war! Should we also ban all pickup car models, because they are today's favorite transportation vehicle for terrorists?
Allthough the only customer group buying V22 Ospreys is militairy, the intentions are diverse: the Ospreys where bought in the past in fact to also do SAR missions, and according to wikipedia, by example the US Navy only bought them to do logistics and SAR-missions.. Which they sometimes just need to do. Also for civilians.

So, let the debate begin! What is your point of view on this? Rightfully cancelled, or you think they should launch it as planned, SAR colours and everything? Use the poll and leave your additional reply!

For more read on this please visit the article at brickset.com | V-22 under creative commons licence, set photo copyright The LEGO Group - originally shared at intertoys.nl

This is soooo complex... We should end war, yes! A set prevented to get launched because related to warfare, I get that. But I do also feel cancellation is killing any debate about this as a topic. If I would be a pacifist I would love TLG to create a SAR version so I could carry that on my hat while protesting against militairy purposes in general. As an example for how things once intended and invented for the militairy, can be used for better purposes. Complex stuff this.

Fully disagree with your article @JackBrick there's an enormous bias towards LEGO and their products. LEGO does it, people enjoy LEGO so it should be alright is a bit of the gist of what I'm reading. But it isn't! LEGO has been stepping on their own principles for a long time now with stretching their brand to sell loads of expensive stuff. There used to be a policy of we don't market to adults. And this is just having overstepped their core identity too far. It doesn't matter to me who protested this (I don't think LEGO cares about that sole group). It's a mistake the set did get to this stage and they rectified this far too late.


JackBrick wrote: ↑Wed Jul 22, 2020 10:56 am but maybe the right question in this case is: is the viewpoint of the pacifist group from Germany really the viewpoint from the masses? Or just a biased minority?

This isn't relevant. to quote Ian Malcolm: (They) "Were So Preoccupied With Whether Or Not They Could, They Didn’t Stop To Think If They Should" This project should have been stopped by the manager of the person who started the idea. Or at any other stage in the design and internal review process. LEGO has been actively working with a weapons manufacturer and gets a license so probably pays them as well. That's not ok!!!
Sarcasm is my oxygen

LEGO does it, people enjoy LEGO so it should be alright

That is not how I feel about it nor what I tried to set as a tone.

The fact the we are having this debate means it gives us, the people, an incentive to rethink our opinions. I think this is a good thing coming from the screwup itself. We would still be having the same debate if they would release it as a set.

And I believe both Bell and Boeing have different purposes and are not only making militairy stuff. Maybe their collab does, this I don't know?
Founding father of this website.

That's why I said, it read to me like that, wasn't judging the intention, it just seemed too defensive of the product (coming from the opposite viewpoint)

And I believe both Bell and Boeing have different purposes and are not only making militairy stuff. Maybe their collab does, this I don't know?

And Rolls Royce makes more than big cars, but some of it just shouldn't be thought of in Billund. In other words: Just because they do other things doesn't mean this was a good idea with good intentions.

LEGO choose greed over brand identity. They got called out, and apparently, they admit there's merit to the claim and they've made a mistake. Hopefully this makes them re-evaluate the internal processes and give us better products.
Sarcasm is my oxygen

@Squid Animations @Domo what is the TFOL standpoint in this debate? #daretoask

@JackBrick I'd recommend this video. JANG really eloquently making the point I tried to make and why I object to the way you said it.

Although I disagree with him that the rule is stupid.
Sarcasm is my oxygen

Germany is the last one to come up with ending wars bruh. (Sorry German readers, but this makes me kinda mad)
Top

@Squid Animations can you elaborate on why this makes you mad, since the cancellation has nothing to do with Germany, Germans or these activists? Check out the JANGbricks video, he explains really well why this should ony be blamed on LEGO.
Sarcasm is my oxygen

@Bricksterdam I watched the video of Jang, and he does have a point which does not lie far from the viewpoint we allready discussed. He does give more arguments. I agree it was a flaw from TLG, but I do feel they need to stick better with their own viewpoint to not recreate war stuff into LEGO.


Squid Animations wrote: ↑Sat Jul 25, 2020 8:08 pm Germany is the last one to come up with ending wars bruh. (Sorry German readers, but this makes me kinda mad)

Well this in an interesting thing to say! Did you know that in current day politics Germany mostly takes the lead in de-escalating politics to prevent wars from happening? Opposed to our Dutch politicians who are more about the "well let's see what happens first"-mindset?
Founding father of this website.